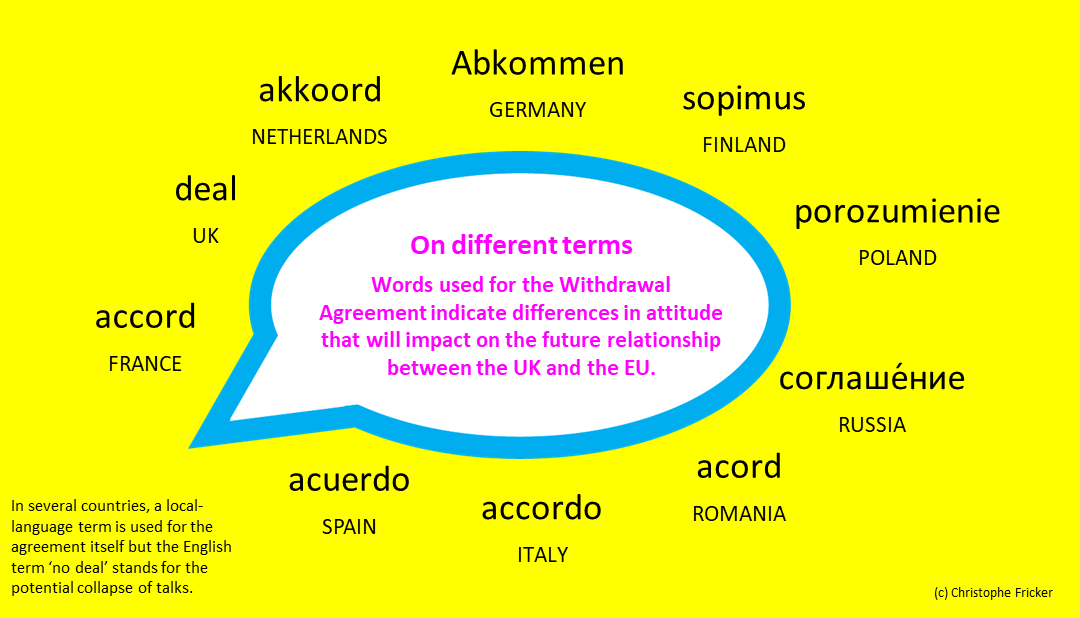 For the UK, it’s deal or no-deal. But other European countries talk about the options for Britain’s withdrawal from the EU in different terms. The divergence in terminology indicates that attitudes to Brexit as well as the European project more generally are also quite different. Word choice is a function of underlying values and, in turn, serves to reinforce these values.

A variety of terms are available in any language to describe the document composed by negotiators beyond its official name, “Draft Agreement on the withdrawal” of the UK from the EU and Euratom. Considering, for example, the difference between agreement, treaty, settlement, pact, covenant, and entente, any English-speaker will sense that different paths are sketched out by documents with these titles. While treaty emphasises a text’s legal status, covenant has religious overtones, and entente evokes specific historical precedents. Pact was the term used during the Cold War by NATO for the Soviet-led military alliance, mainly because it had Faustian undertones of a wager with the devil. The Warsaw Pact’s actual name, Warsaw Treaty, was the preferred choice of sympathisers of the East.

Things become even more complex when we look at other languages. Countries with which post-Brexit Britain will forge new alliances each have their preferred way of referring to the Withdrawal Agreement, meaning that they, too, see the prospects of a future relationship in a particular light.

The UK is the only country in which everyday parlance is most consistently dissociated from the official name of the text. This is in the tradition of what Janice Morphet has described as the ‘double life’ of Brits involved in dealings with the EU who perform a completely ‘different narrative’ when interacting with their local audience than with their European counterparts. Working out the future relationship will be more difficult if this double-speak continues and if differenes in underlying values, as evidenced in language, are not addressed. This would add to the impression that public discourse around UK/EU relations and the future relationship is diverging, which I have pointed out earlier in this series.

Thank you to journalists, translators, and researchers across Europe who have contributed to this assessment.