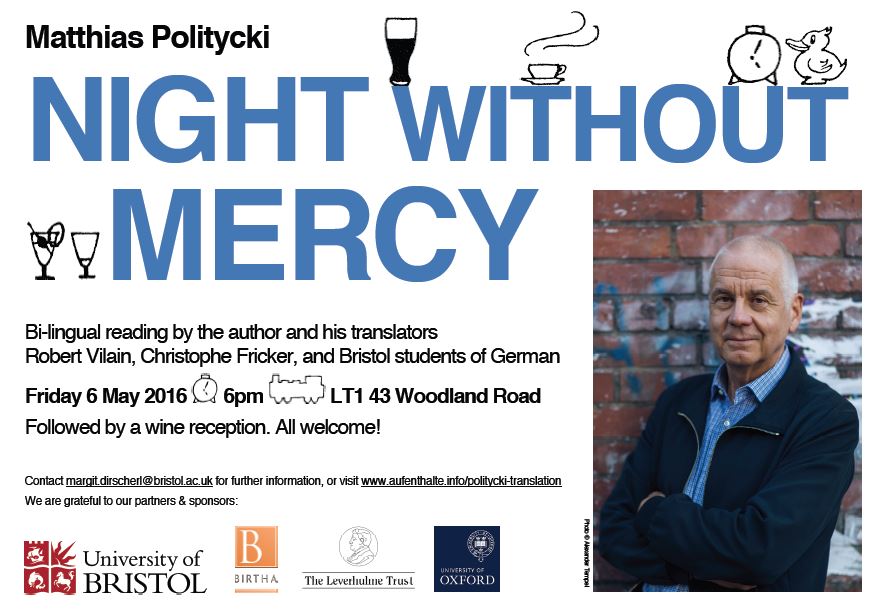 Matthias Politycki — best-selling German novelist, dedicated Marathon runner, and crazily inventive poet — will come to Bristol in the first week of May 2016 to talk writing, translating, and drink. Yes, drink. Politycki is the author of London für Helden (London for Heroes), an epic journey along the “ale trail” around the British capital. During his visit to Bristol, organised by cultural studies scholar Margit Dirscherl, the poet will join undergraduate students for a translation workshop (Tuesday, 3 May 2016, 4pm), and he will work with Robert Vilain and myself on English translations of some of his most recent poetry, from song to sonnet, making this the first-ever collaborative Matthias Politycki Translation Project.

To top off the week, all of us involved will read some of Matthias Politycki’s poetry in both German and English — fingers crossed for our translations to be done by then! That’s on Friday, 6 May 2016, at 6pm, in LT1, 43 Woodland Road. The reading will be followed by a conversation about the collaborative work undertaken during the week, and of course by dinner.

For Robert Vilain, this endeavour forms part of a larger project exploring the poetics of the sonnet. Being very much interested in metre and verse, I hope to be able to contribute to discussions around the fabric of contemporary metrical poetry as well.

Matthias Politycki, born in Karlsruhe in 1955, is one of Germany’s most acclaimed writers and has long been playing a leading role in Germany’s literary landscape. Critics praise the variety of forms of his poetry, his artful language, his humour, light-footed irony and amusing sense of melancholy, the readability of his verse and the wealth of allusion and innuendo contained within it.

Even in an era where most German authors write free verse or dismiss lyric poetry altogether, Matthias Politycki remains faithful to established poetic forms, including the sonnet and the haiku, which he has truly mastered.

Matthias Politycki’s other well-known literary achievements include Weiberroman, his break-through work as a novelist, and In 180 Tagen um die Welt, a satirical masterpiece about the author’s 180 days as writer-in-(non-)residence on board one of the world’s most luxurious passenger cruise ships. Next World Novella (translated into English by Anthea Bell, OBE) was described as grim tale playfully teasing its reader’s expectations (Rebecca K. Morrison, TLS) and listed for The Independent Foreign Fiction Prize.