My Case for Remain — why the UK is stronger IN

Pupils at the Royal High School Bath as well as Oxford University alumni gathered for a debate about the EU referendum. Here’s the statement I gave, making my case for Remain. 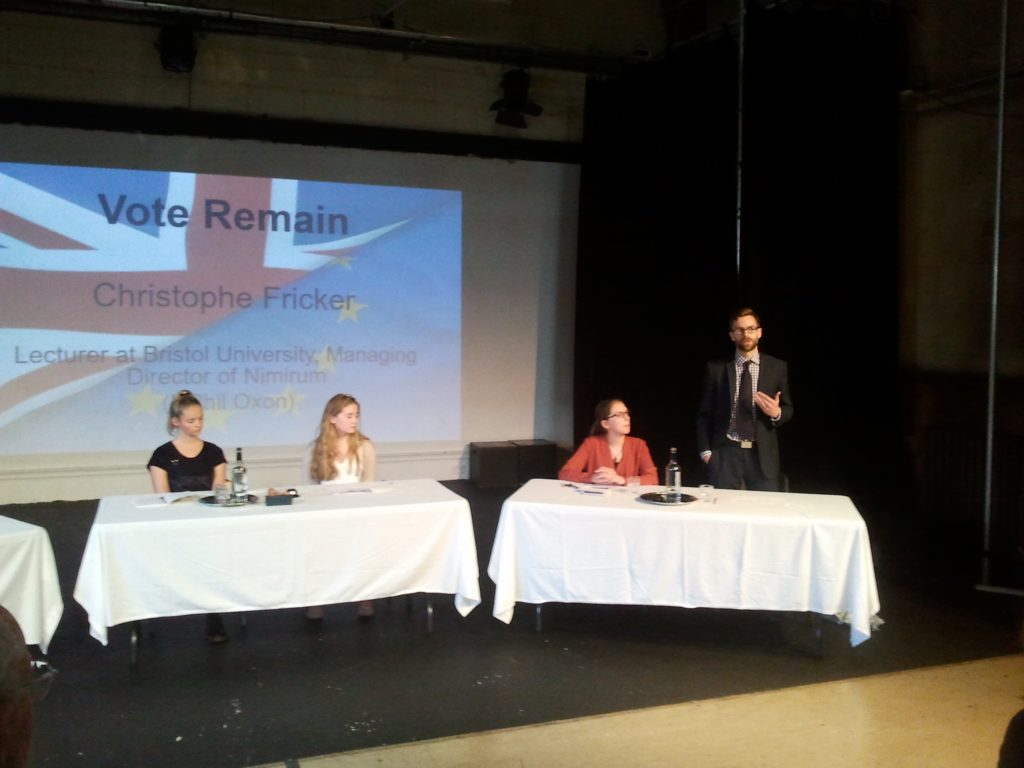 I am able to be here tonight because of the European Union. Without it I would not exist.

Thanks to the European project, my French father was able to come to work in Germany where he met my German mother. He was able to settle down in Germany without being regarded as an enemy. He did not have to kill my German uncles, and they were not forced to kill him either. In any of the earlier centuries of intermittent war – culminating in World Wars I and II – this would have happened.

I am quite literally a child of this European project and of an unprecedented 70 years of peace in Europe. It is the EU that won this peace by strengthening the ties between our nations.

This European project is fundamentally shaped by British people on every level.

Brussels is full of Brits, and these democratically elected British politicians are singularly efficient in advancing your British interests in Brussels. The case for remain rests on Brits shaping policies even beyond the borders of the UK.

Brits in Brussels tackle many of the greatest risks of our time; the Retreat campaign is strangely silent on these issues.

Silent on the environment – because many Brexiters are climate-change deniers. Silent and pig-headed also on many of the social, economic, and security challenges ahead of us because they believe that Poles and Romanians are to blame for them and closing the borders will solve them.

The Retreat campaign is silent on the issues, and weak on values. It breeds and thrives on belligerence and mistrust.

Rosie and I, on the other hand, are promoting cooperation – continued, constructive, and, yes, cheerful cooperation with other Europeans on issues that affect your future and mine. 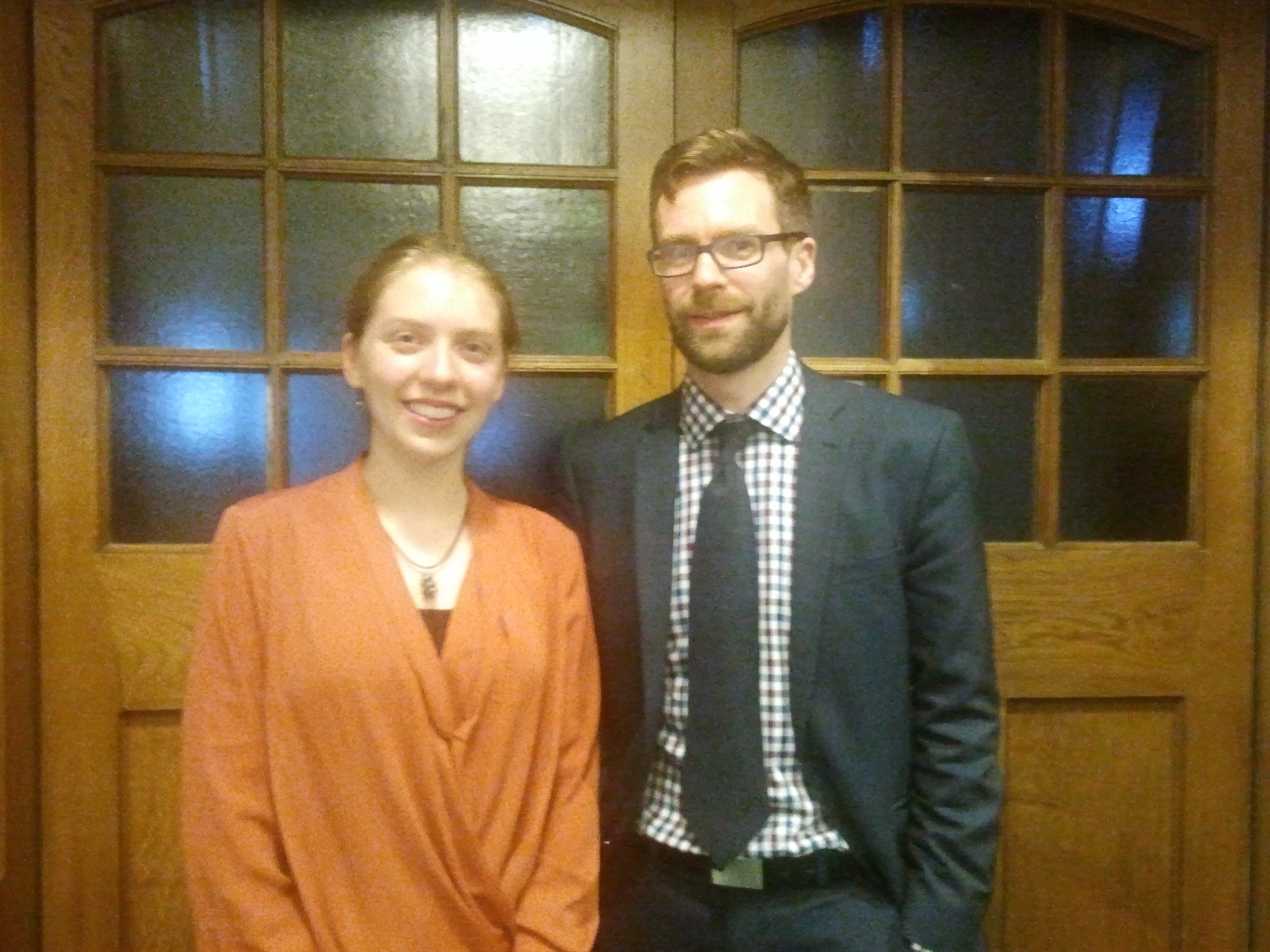 Rosie and I see no point in an assault on the institutions that have fought for peace and democracy and opportunity for seven decades.

We argue not for the status quo but for a particular way of doing politics – a way that has been tried and tested.

We all want our education to pay off and our work to succeed.

These things are no longer a privilege of the super-rich. You can enjoy them too, like so many Brits.

Brits use these opportunities more than any other people in Europe. No better Europeans than the Brits – you are in good company. Millions of Brits have lived the case for remain for years!

Aspiration is supported in Europe, and taking away these opportunities from the girls would do them harm.

We should not deprive ourselves of these opportunities to reap the benefits of peace and do business in a market governed by fair rules. It would be foolish to take them for granted, and mad to gamble them away! The case for remain is a case for peace, democracy and opportunity.

Has the UK “lost its sovereignty”?

Greece and Germany and the UK are run in very different ways. The results are clearly visible, and they illustrate the enormous powers of national government, particularly with regard to the economy.

Whether Jeremy Corbyn or Theresa May is Prime Minister makes a big difference, because national governments are hugely powerful.

But the way they interact with each other and the way we interact – in Brussels and Berlin and Bath rather than at the Somme – has changed beyond recognition in the past few decades. This is what Europe is.

Sovereignty means that your decisions count. And your decisions as a UK voter – on climate change, security, and many other global issues – do not count if the UK is isolated.

If you don’t want it to be isolated there is no need to reinvent the wheel – use your influence!

And what about the borders?

Brexiters usually get many things mixed up.

They talk about “immigrants” and mean people from Somalia or Pakistan or Jamaica as though these countries were in the EU. They aren’t, and the EU is perfectly able to open or close its doors to them as it pleases.

They talk about “immigrants” and mean Syrian refugees. But there are so few of them that even many Brexiters see this lack of international engagement as profoundly embarrassing.

And they talk about Polish and Romanian people but can’t quite decide whether these people “steal our jobs” or “just claim benefits” – you cannot do both. It’s hard to engage with an argument when there is no argument.

Undue competition in certain parts of the labour market is caused by successive UK governments’ decisions to deindustrialise the country and make it harder and harder for people on some parts of the lower end of the skills spectrum to find work. This has nothing to do with the EU!

In two weeks time we have a wonderful chance of declaring that we are keen to live, study, work, and travel in a safe and democratic European Union, and glad to have many mechanisms at hand to tackle the great challenges of our time, and that the case for remain is clear: we’re stronger in!